What are the issues?

Sumatran tigers (Panthera tigris sumatrae) are on the brink of extinction. They are classified as Critically Endangered with less than 400 individuals estimated to live in the wild. They are the only tiger species now found in Indonesia after the Balinese and Javanese tigers were pushed to extinction in the 1900s. The main threats to Sumatran tigers are

As with so many species, massive habitat destruction has caused a dramatic decline in numbers of Sumatran tigers. The forests of Sumatra have been decimated to make way for oil palm plantations and other destructive monocultures as well as mining and encroachment from expanding villages. As the human population expands, so does encroachment into forest habitat for housing and agricultural fields. This means humans are living closer to tigers than ever before. With less habitat to hunt in, tigers will often prey upon livestock kept by villagers. This often leads to anger from the villagers and retaliation killings can occur.

Another serious issue facing tigers are snares placed in the rainforest where tigers live. Often these rope or wire snares are set by villagers to catch wild pigs or deer to eat. However, tigers can become severely injured and maimed from these snares and die from infection.

Poaching and the illegal wildlife trade

The illegal trade in wildlife parts is worth billions of dollars annually and is the third most profitable trade on the black market after drugs and weapons. The trade in live tigers and tiger body parts is banned under the Convention on International Trade in Endangered Species. Despite this, Sumatran tigers are still hunted for their body parts including whiskers, teeth, bones, and claws for use in traditional Chinese medicines. Canine teeth and skins are also sold as ‘trophy’ items. The majority of tiger body parts are exported to China. Places that sell tiger body parts include souvenir, jewellery, antique and traditional Chinese medicine shops. The Sumatran tiger is a protected species in Indonesia; however, lack of law enforcement and weak penalties given to perpetrators of wildlife crime leaves this species highly vulnerable. 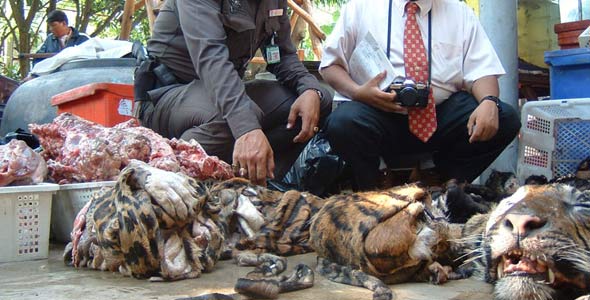